After over 10 years as the #1 volleyball stats app, an entirely new iStatVball has arrived. 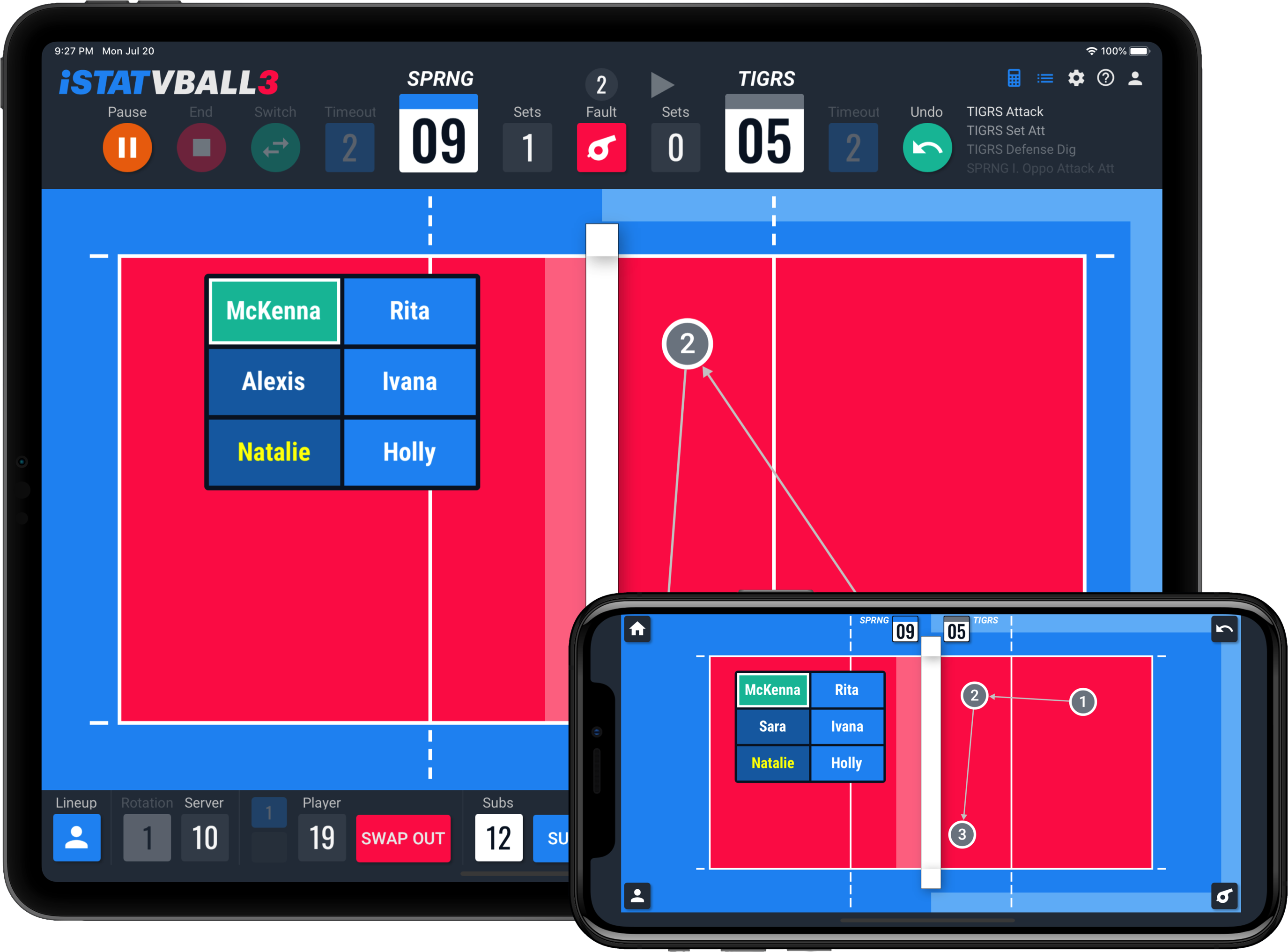 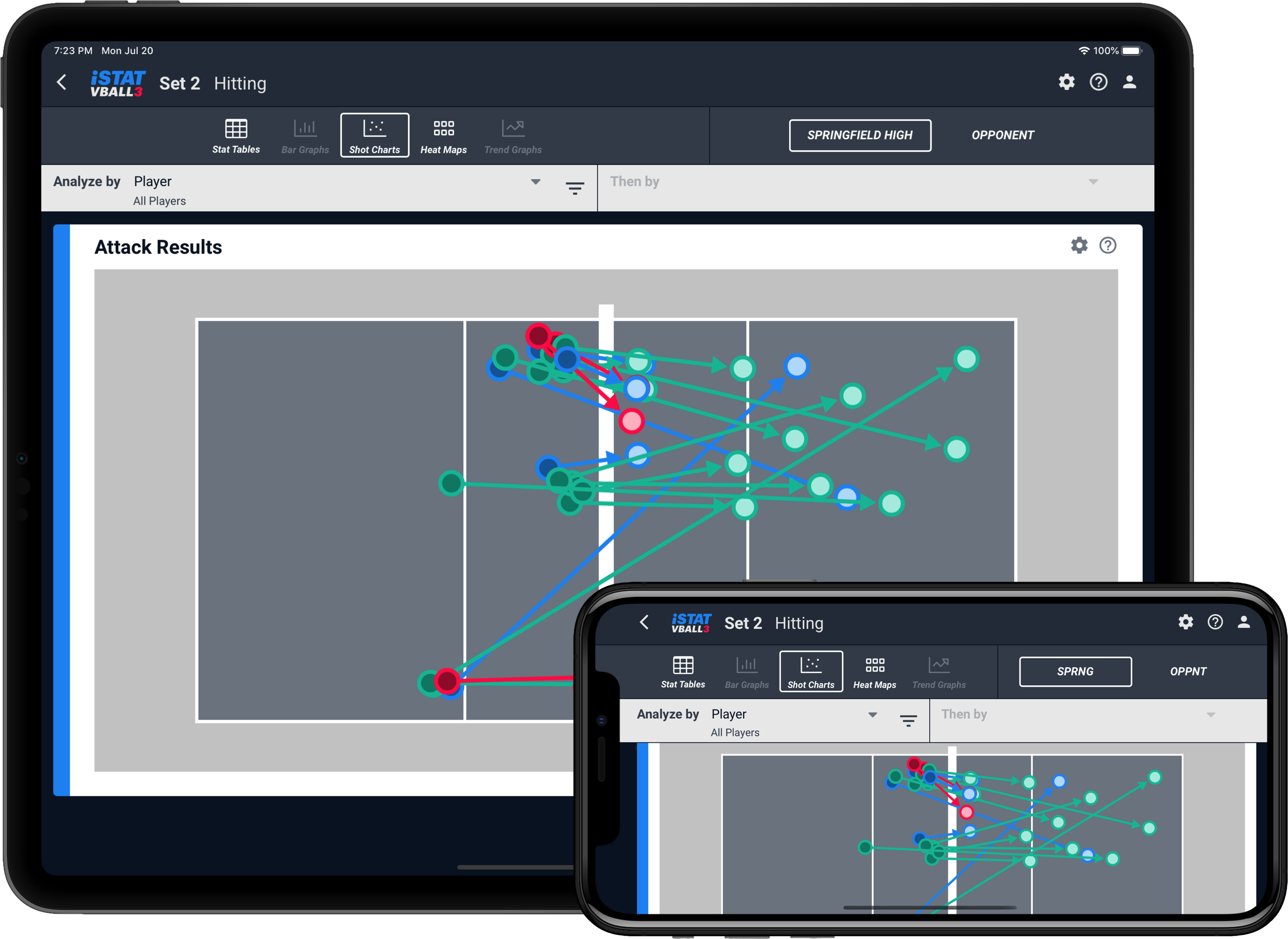 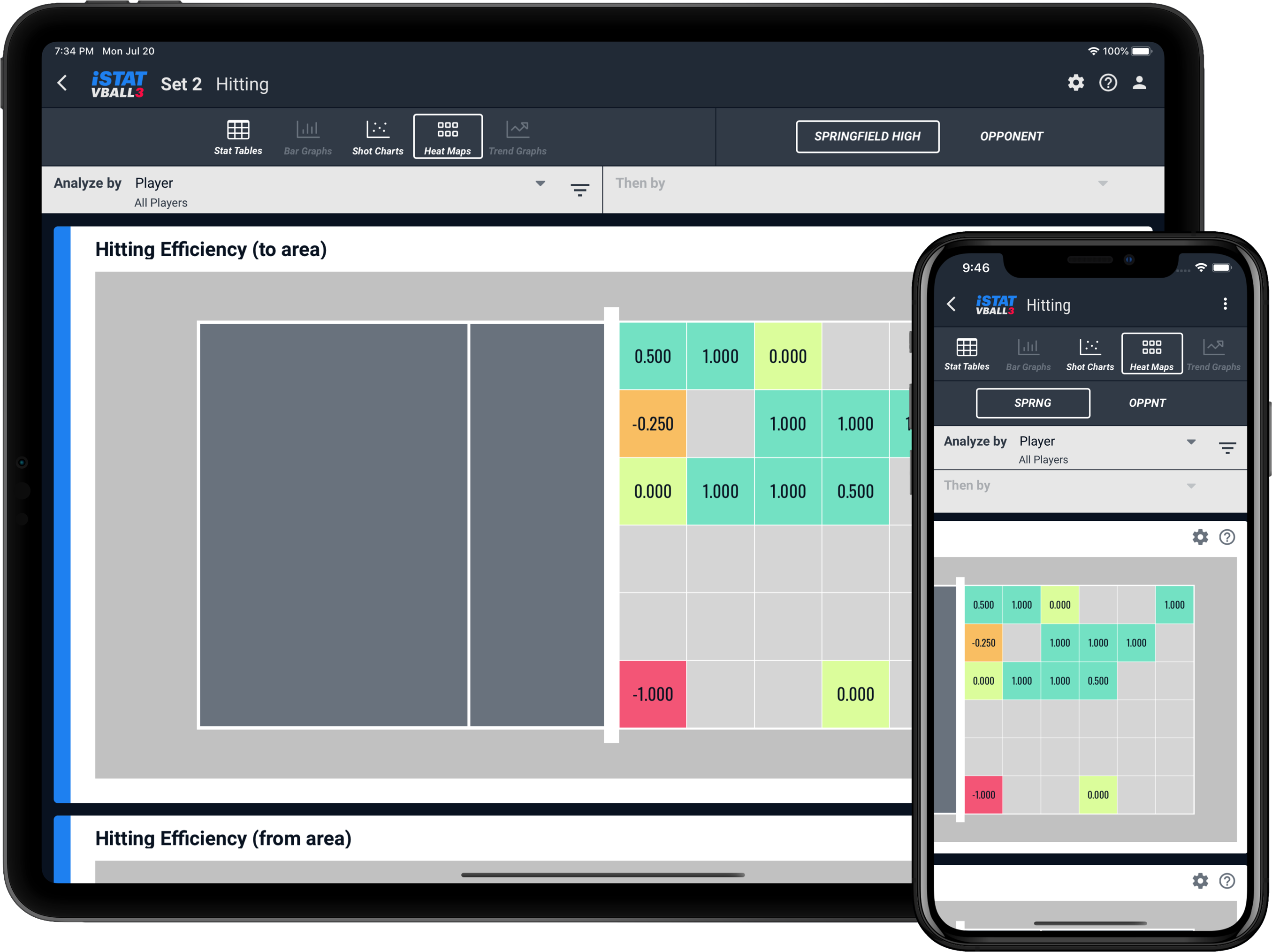 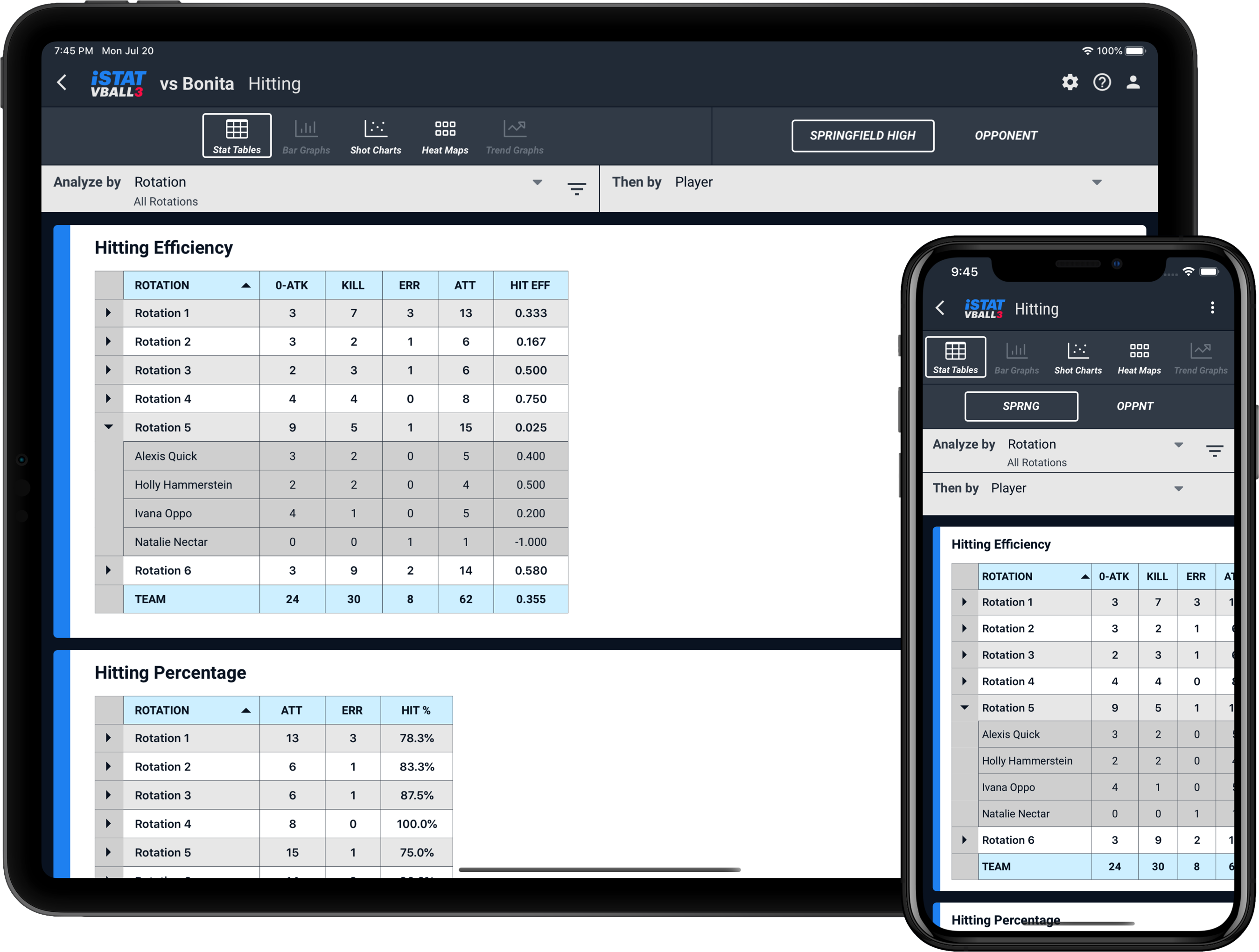 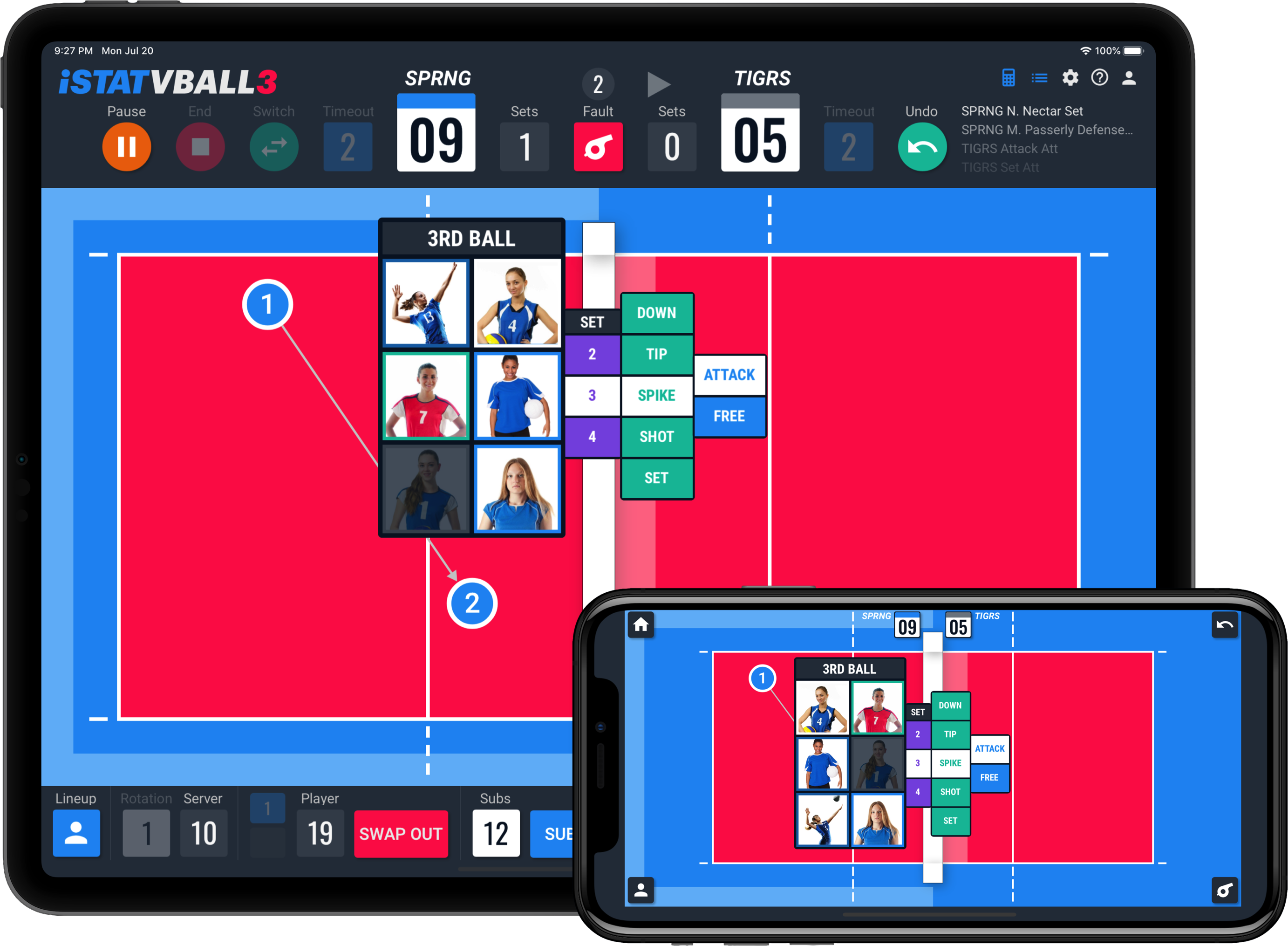 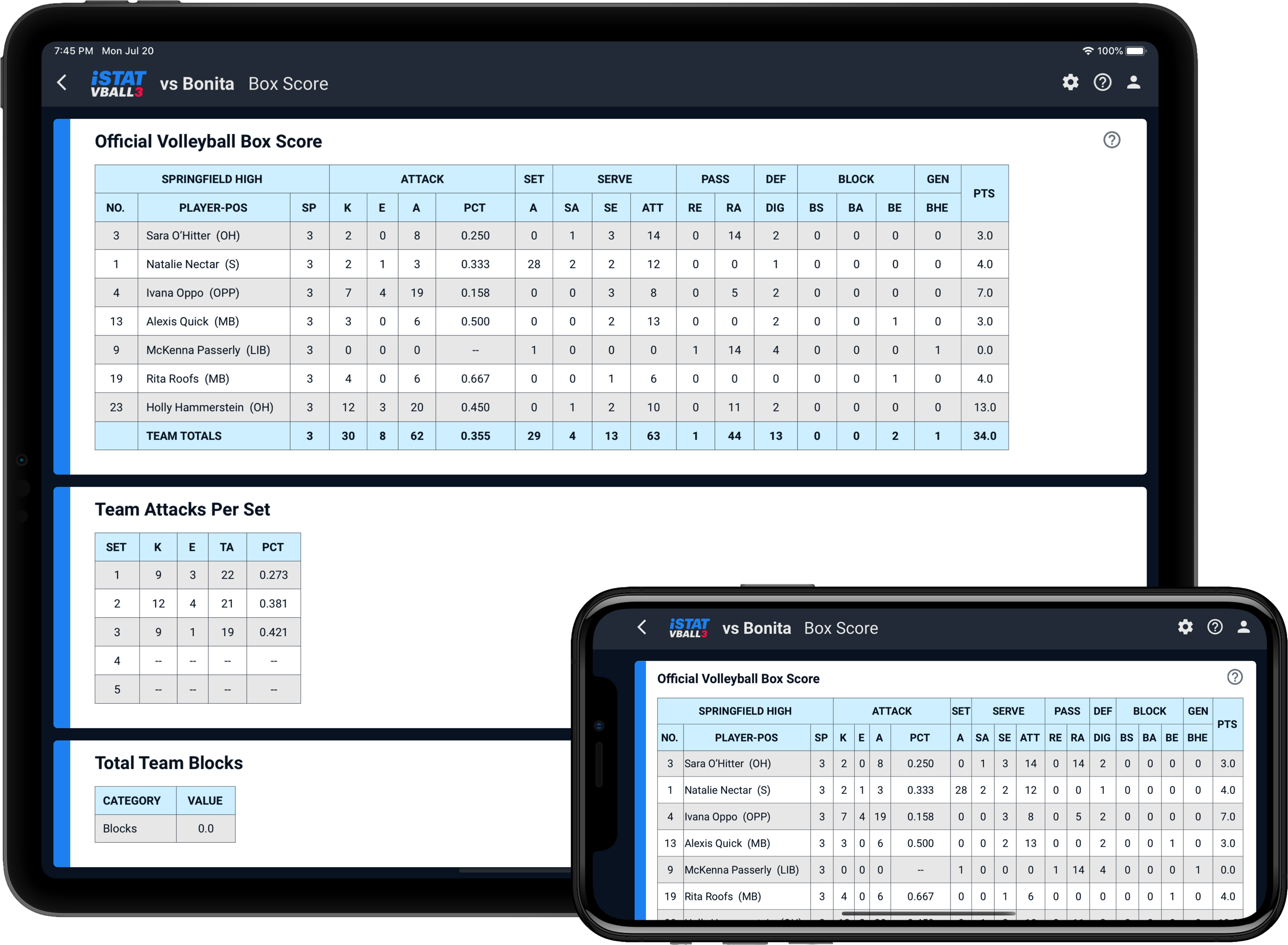 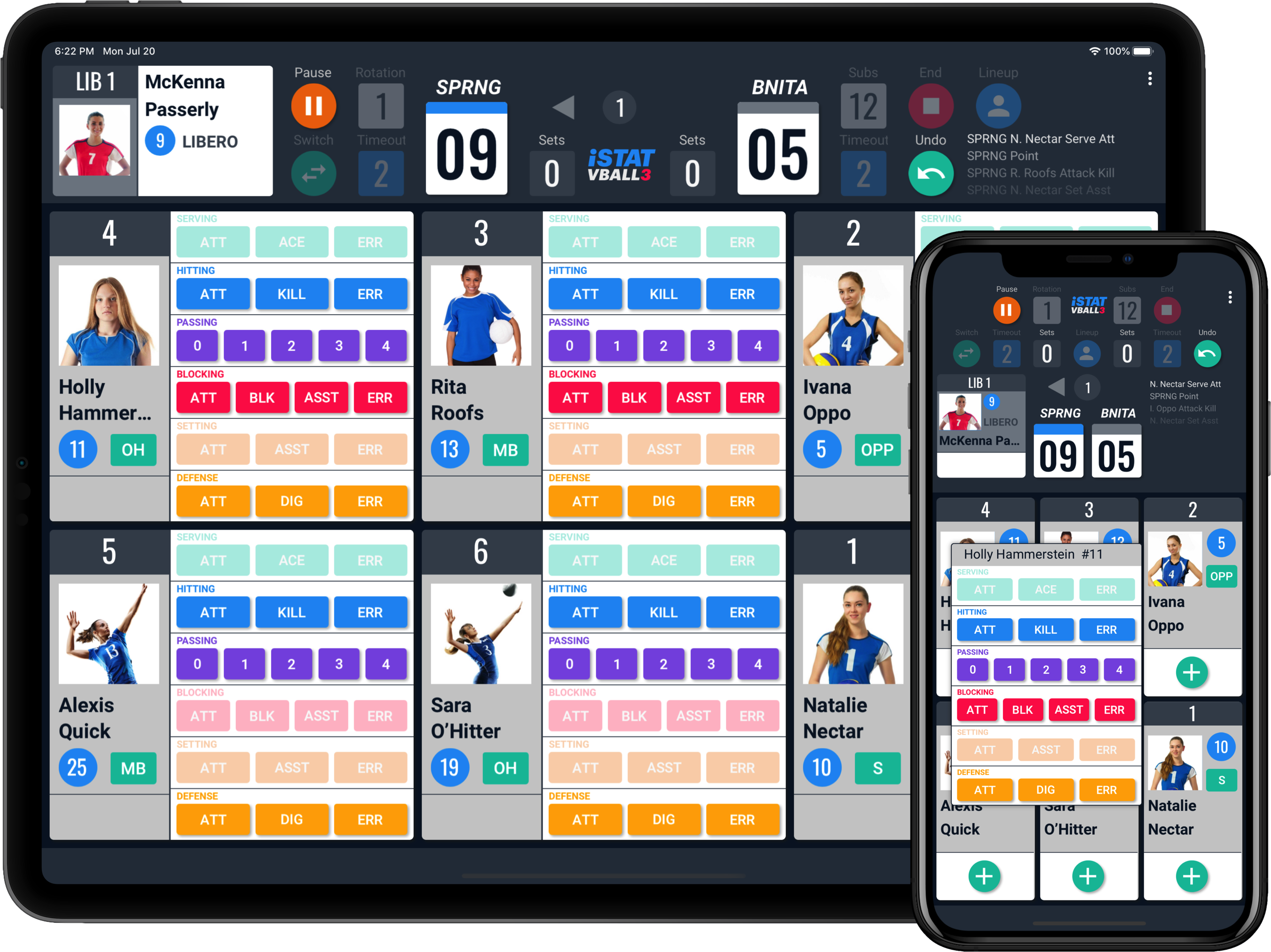 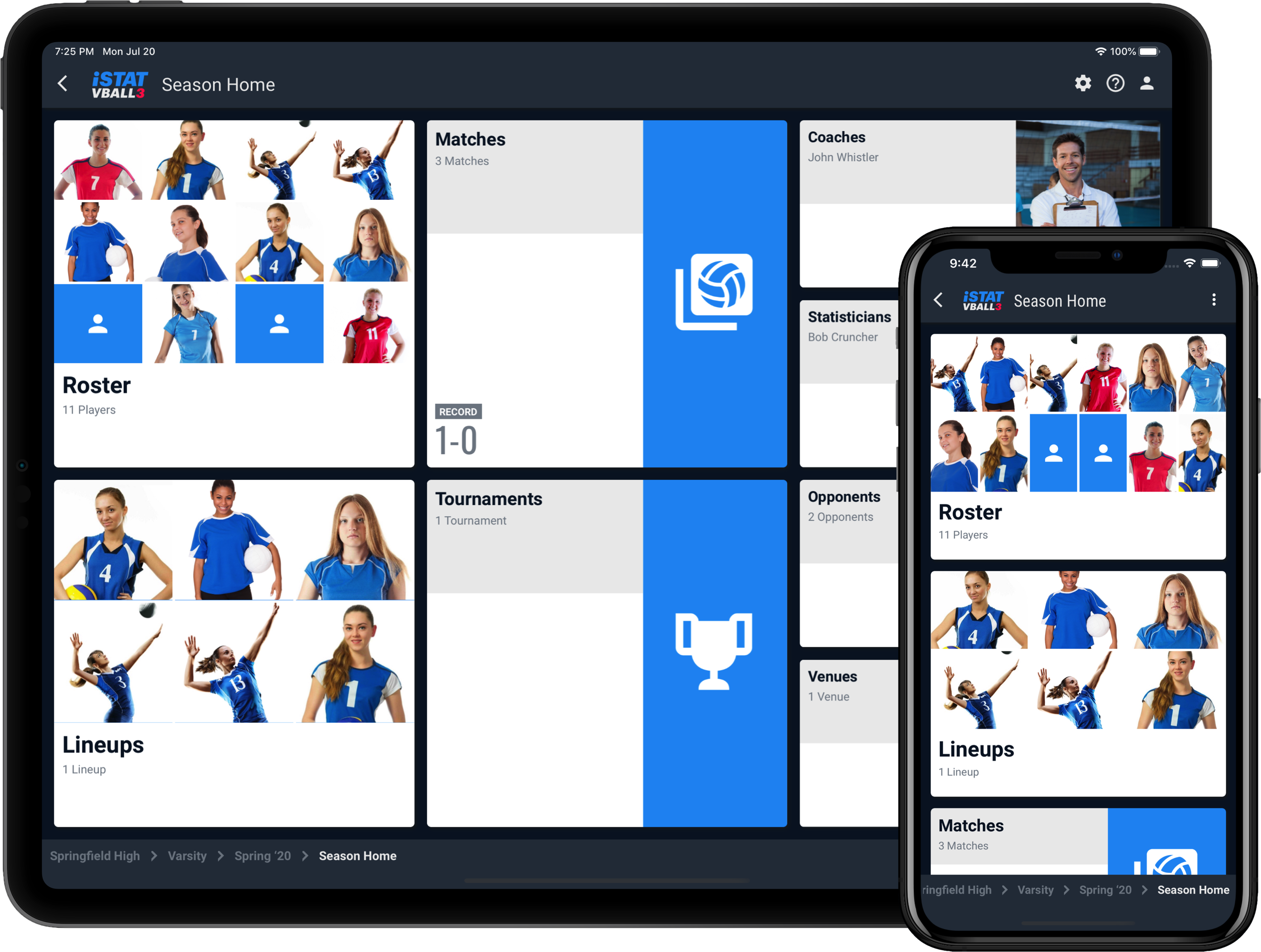 Uses the most intuitive stat entry method of all… the volleyball court itself!

No need to know esoteric stat rules, even a volleyball novice can take NCAA compliant stats. 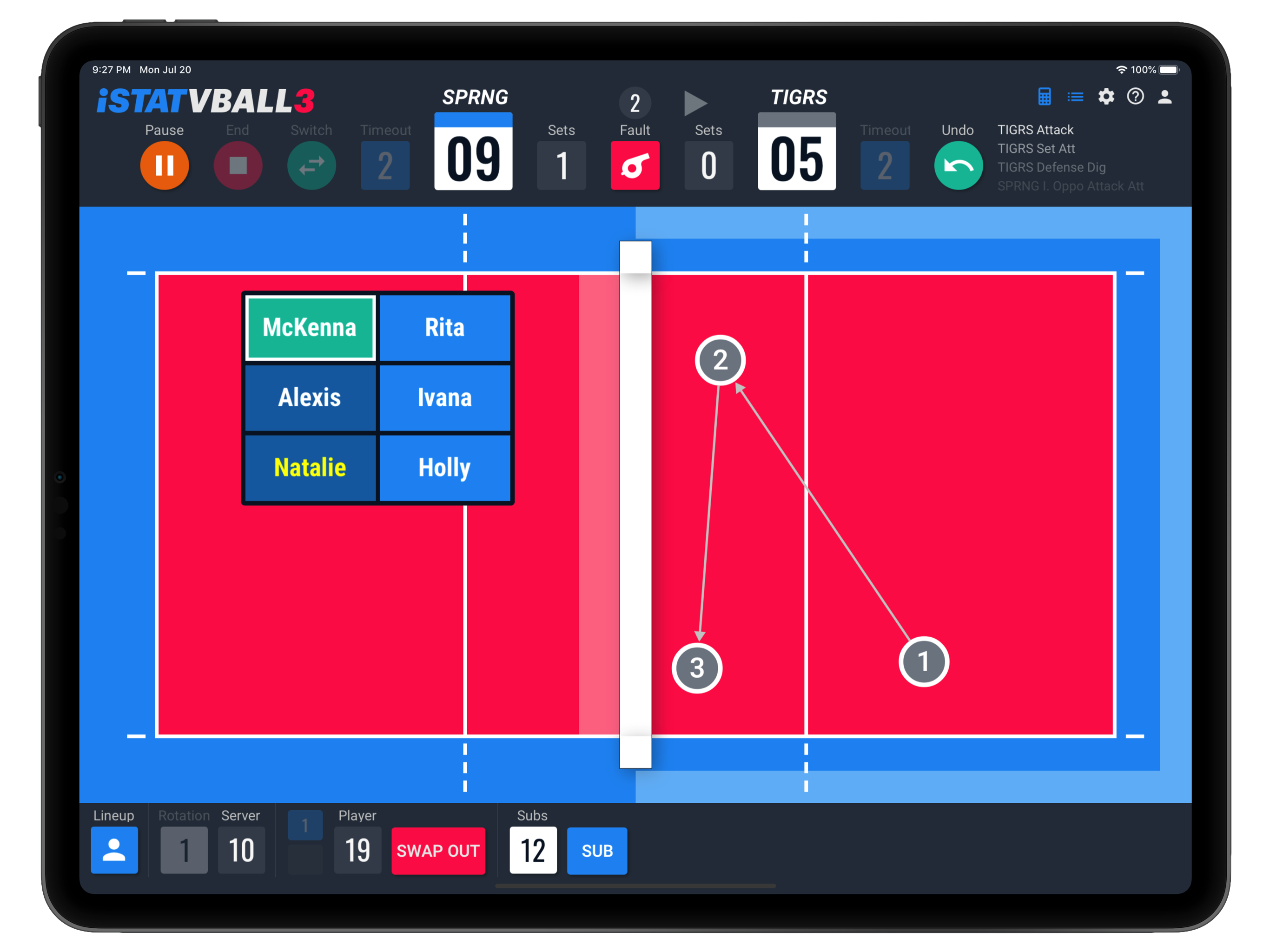 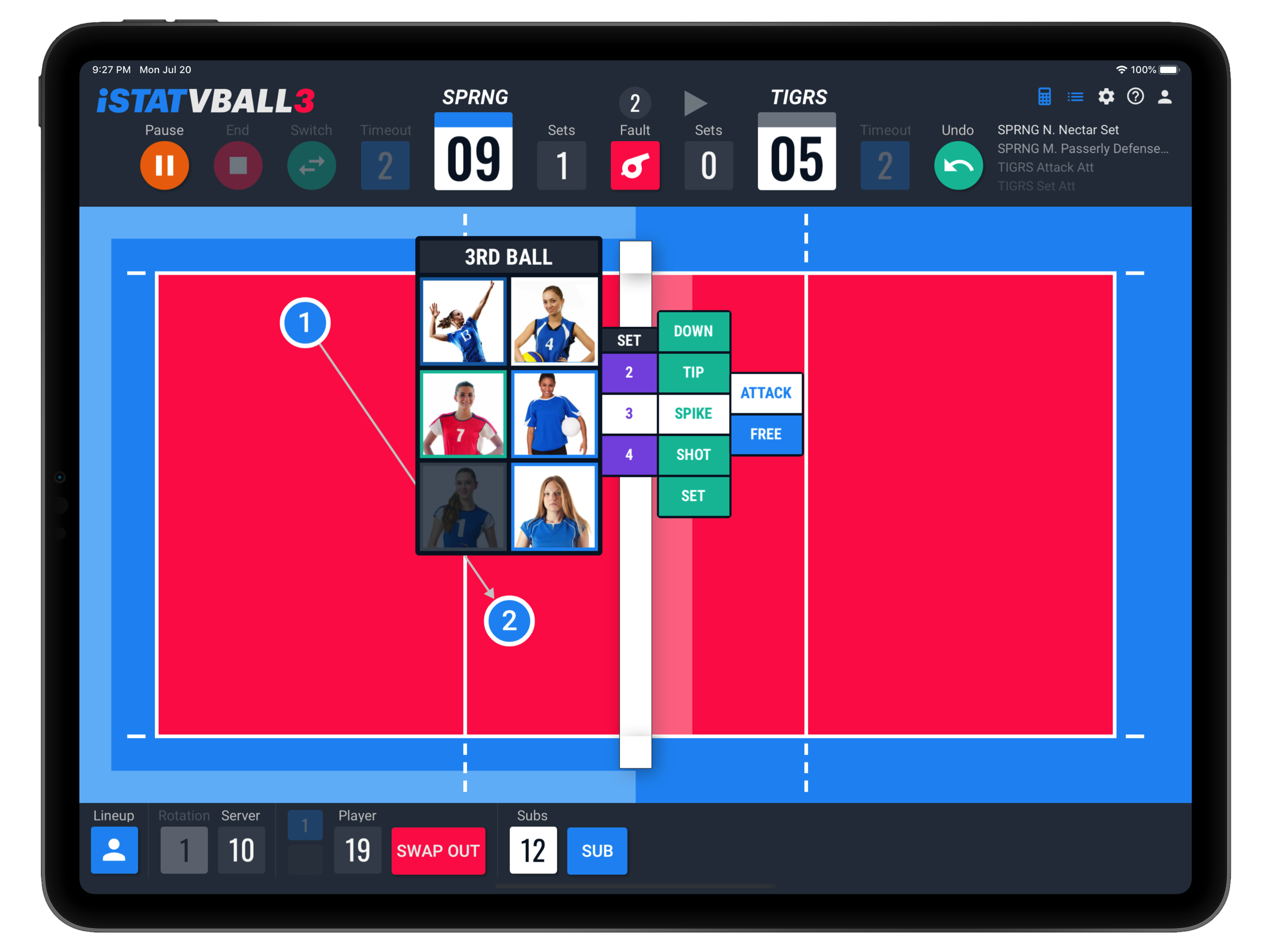 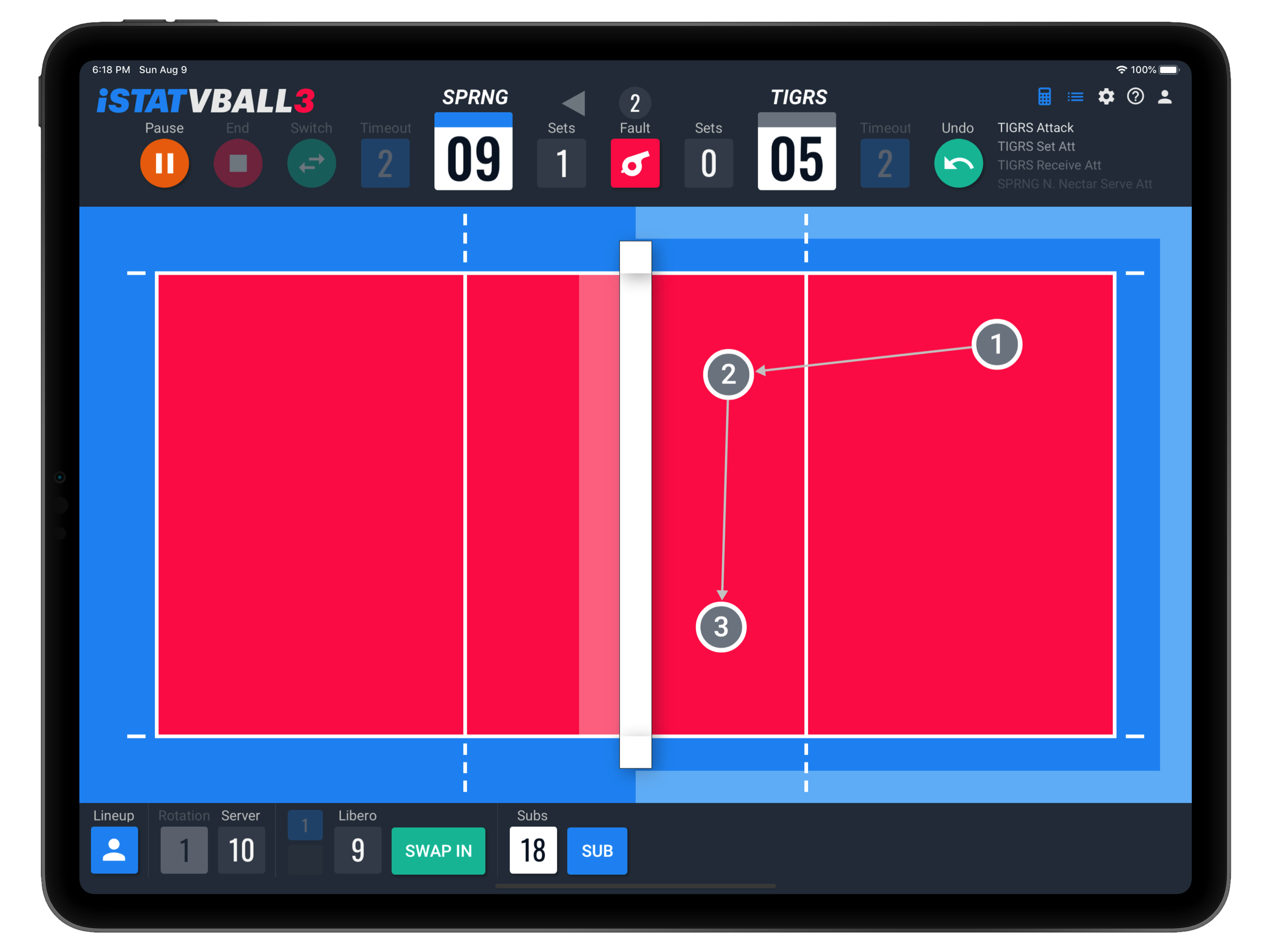 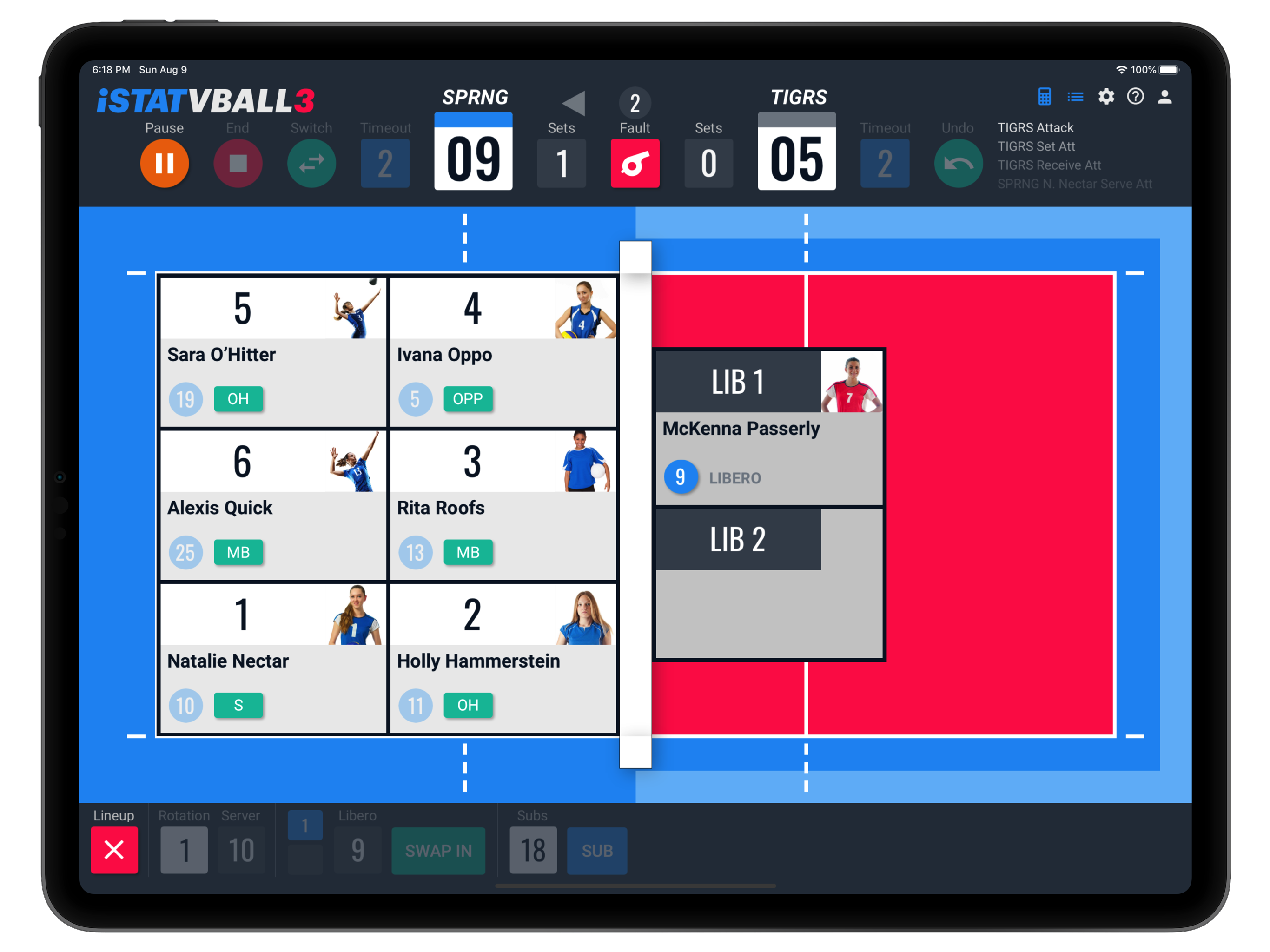 Adjustable stat detail level lets you keep up with even the fastest paced matches.

Eliminates the hundreds of complex buttons found in most other stat entry systems.

Every ball contact is recorded for both teams allowing deeper stats analysis than ever before!

You now have access to the same stats found in software used by elite Division 1 college programs except at a fraction of the cost and learning curve. If your opponent has these stats and you don't… you're at a disadvantage!

Easy to read shot charts for all ball contacts. Visualize set distribution, pass location, and of course hitting and serving. View charts by individual player or for the team as a whole. Chart individual sets, matches, or an entire season. Full opponent shot charts as well!

All the same stats and charts you have for your team you also have for the opponent. Except broken down by rotation rather than player. See your opponent’s tendencies and weaknesses in real-time during the match! Where’s their weak spot on serve receive? Where are they most likely to hit?

See your statistics broken down by court area. What area of the court is your team hitting most effectively to? Where is your opponent passing worst? View maps by individual player, team, or opponent. Customize the detail level. View cumulative maps by set, match, or season!

All stats can be broken down by player or rotation. Full sideout stats for both teams. Analyze cumulative stats by tournament or entire season. Track career stats across multiple seasons or across multiple teams. Cumulative and career shot charts and heat maps as well!

Easy to read stat tables with sorting, locking columns, and more. Expandable rows allow you to drill down deeper into your data. Have a weak rotation on serve receive? Expand to see exactly which player is the cause. View any stat by player or by rotation.

All stats and charts are available in real-time during the match. Don’t settle for stats 24 hours later. Good coaches know you need stats on the bench to make the best in-game decisions. You can even view stats on your device while a statistician is recording stats elsewhere!

Your valuable stats are automatically backed-up. Never lose your data again! Move seamlessly between devices, from tablet to phone, iOS to Android, your device to someone else’s.

Are you an existing iStatVball 2 user anxious about the change? No problem, the full v2 recording interface is available in v3!

Full integration with MaxPreps. Upload match stats directly from your device, no need for a computer in between. 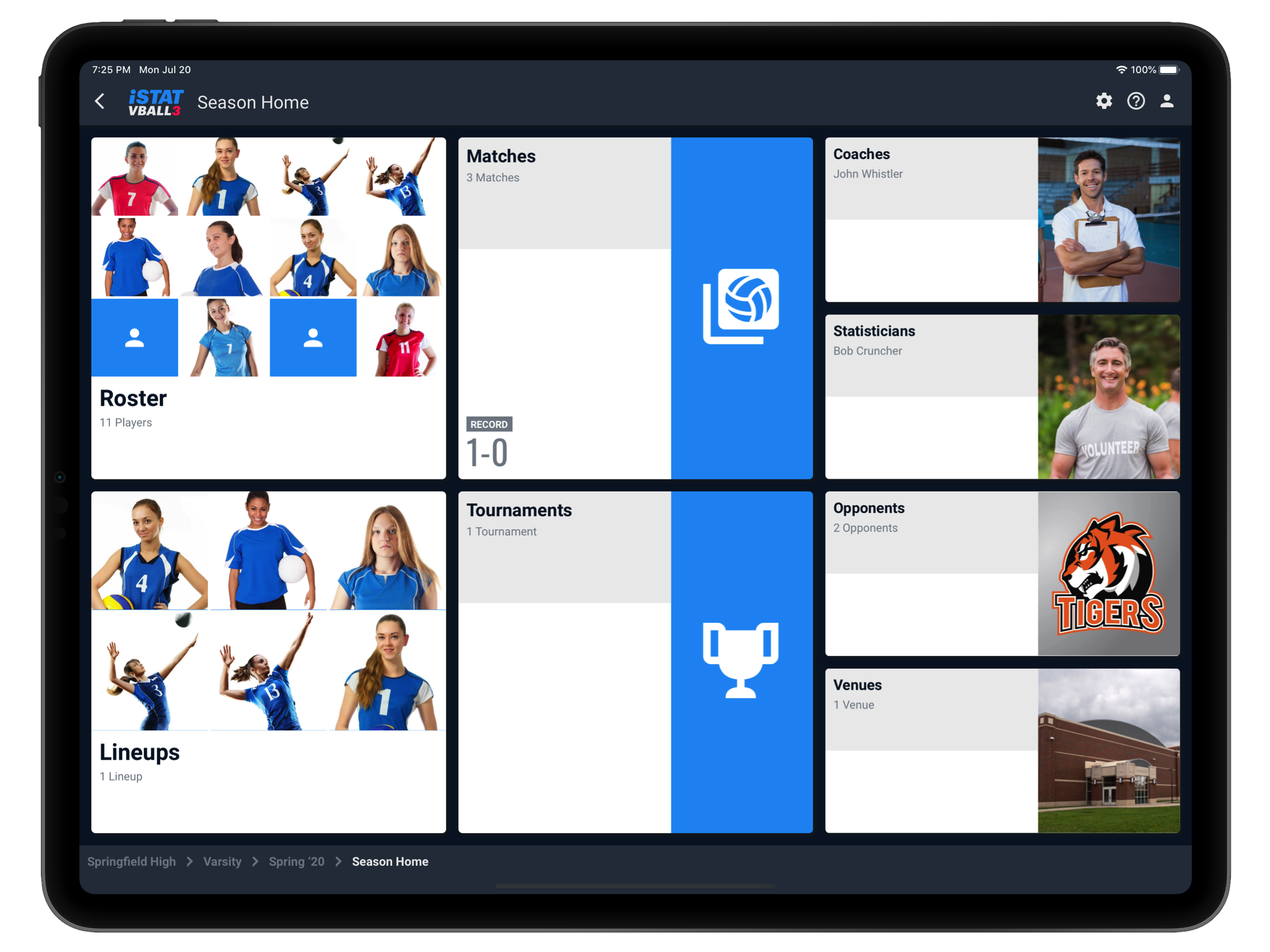 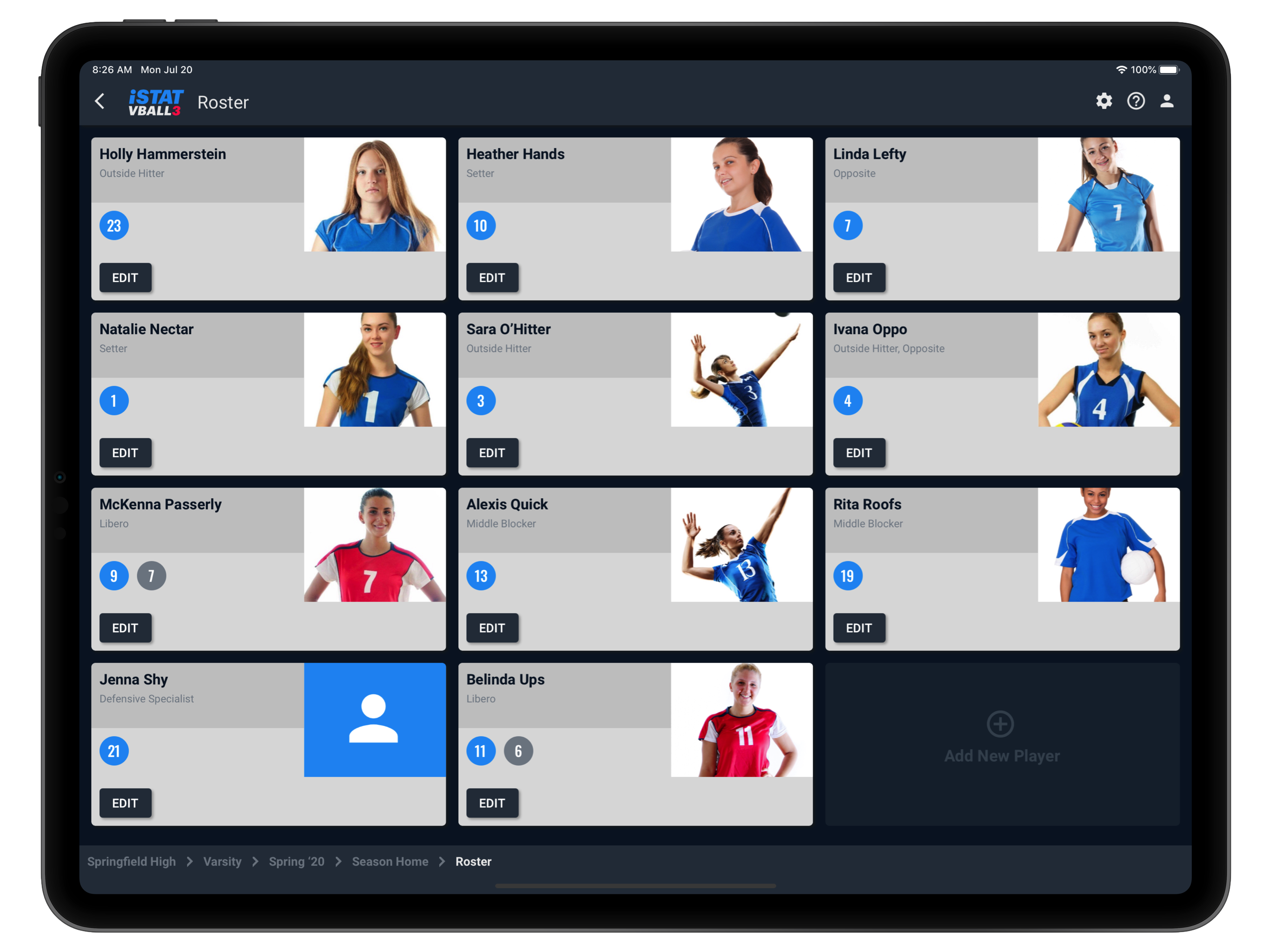 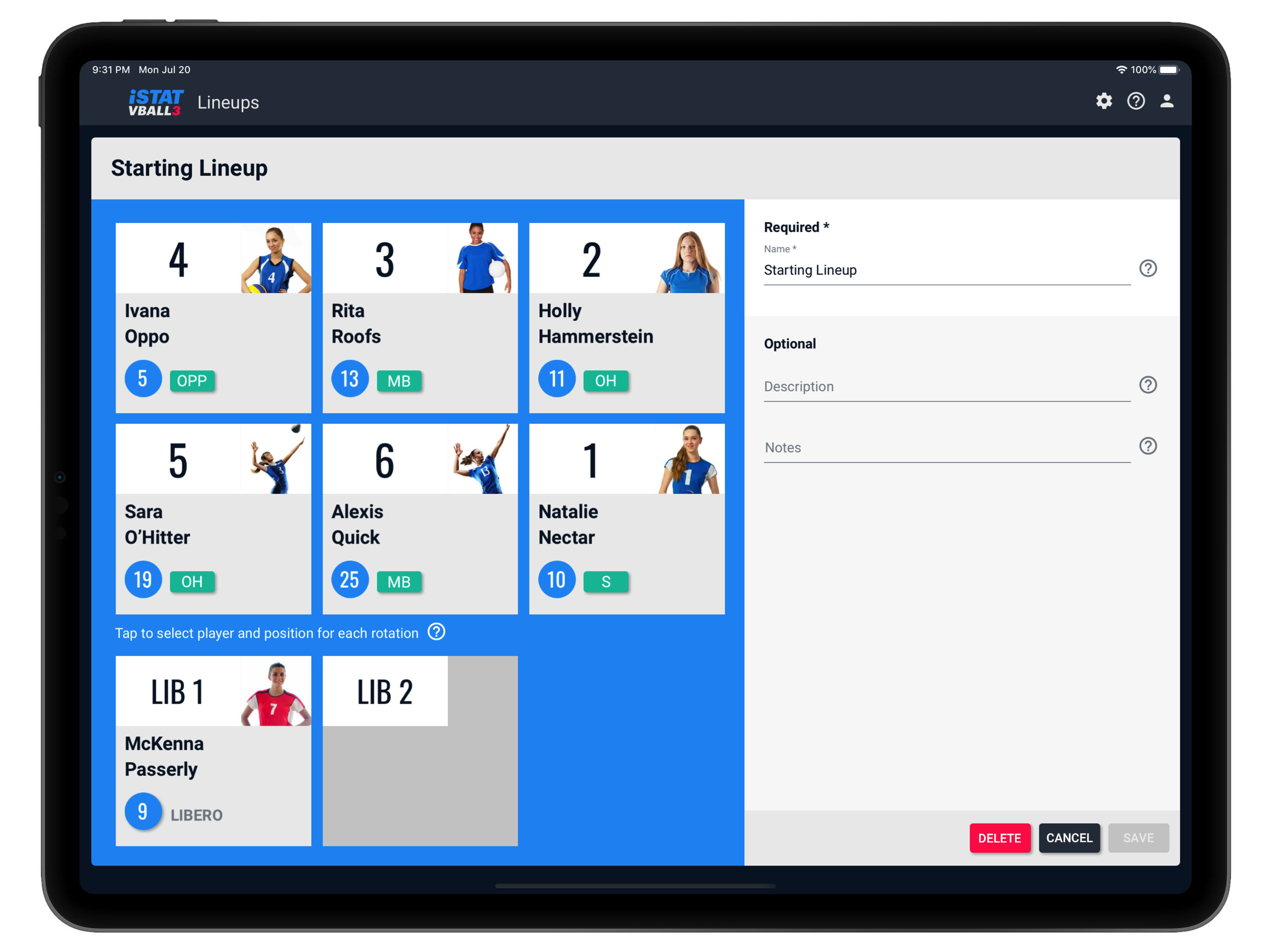 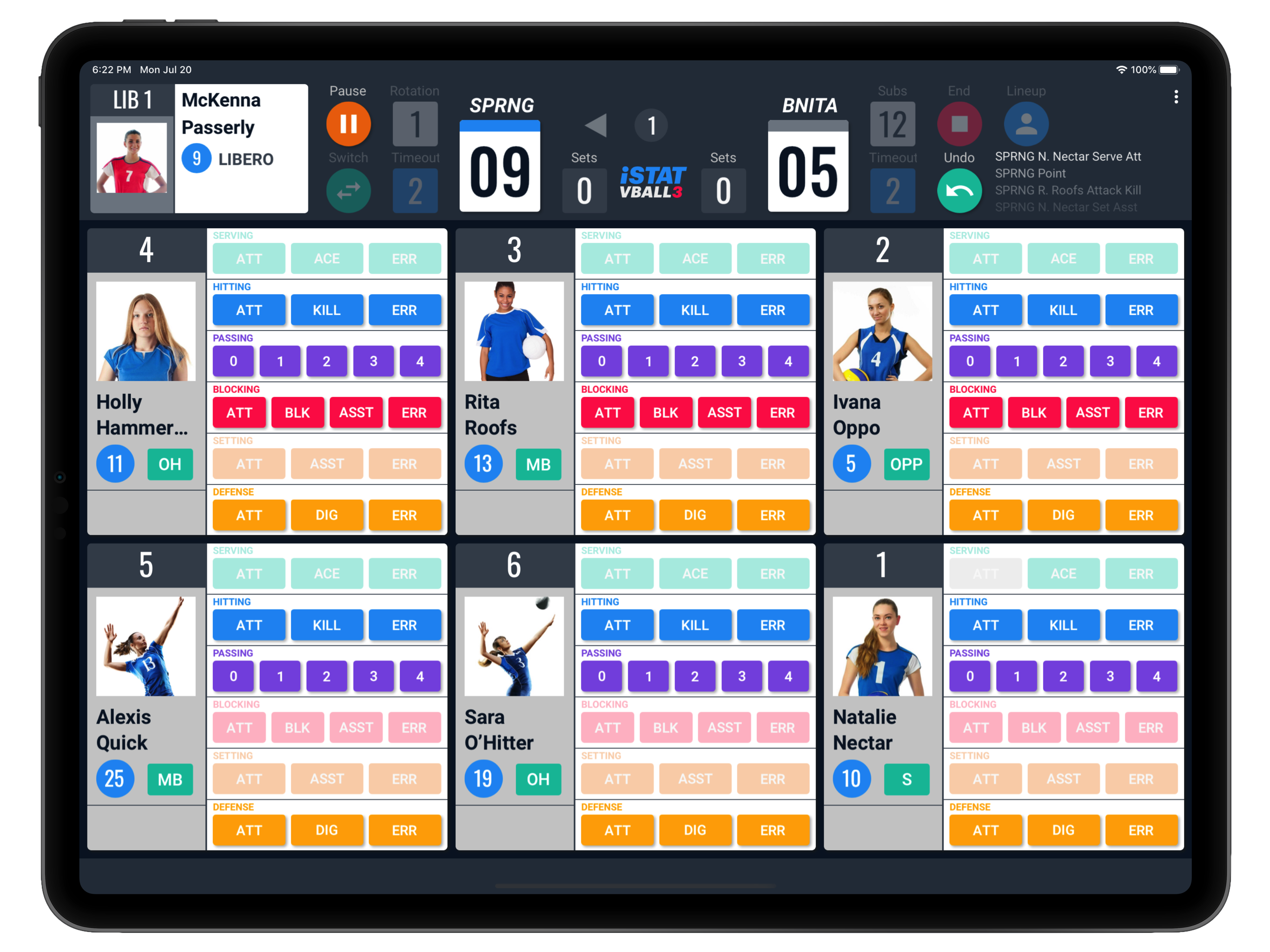 Easily organize your data by school/club, age group, and season. Great for multi-team schools and clubs. Quickly pre-create lineups with the Lineup Builder.

Import all your data from v2 and take advantage of many of the new v3 features. Now you can get career stats for all your old teams!

Concise tutorial videos directly within the app. Responsive email support available whenever you need it.

See what your fellow coaches have to say...

iStatVball 3 is the real deal. You'll be able to use more in depth stats to fully customize your practices around your team's needs. And the new touch screen recording feature will allow you to be more in the game instead of face down on a device! 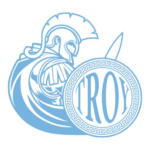 Coach Ryan M.
Varsity Coach- Lincoln Way Central HS
Head Coach- Club 1 VBC
This application takes our program to a new level. With extended fields of statistics and data available, this application provides us the knowledge to better utilize our players, team, and even coaches! The best part of all, ANYONE can learn! 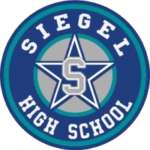 Whitman C.
Sports Information Director- Siegel High School
We've used iStatvball for 8 years. My son was a reluctant stat keeper but instantly loved Version 3. His words... ``Being able to take the stats and see 'Heatmaps' was really cool!`` (and so helpful to the Head coach). Players loved seeing the visual results, it helped them relate to the plain numbers. 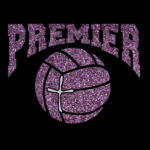 Coach Peter M.
Club Director- Oklahoma Premier
iStatVball 3 combines several apps that we used to use for analysis into one easy to use platform that can help us keep track of our athletes from year to year. iStatVball 2 was our favorite stat app before, but this takes it to a whole new level.

Coach Andrew V.
Varsity Head Coach- Chillicothe High School
I've been a fan of iStatVball 2 for some time, and iStatVball 3 is a game changer. The shot charts and heat maps you get without additional effort are amazing. If you don't know what those are, you'll love how they work.

Coach Stuart P.
Varsity Asst- Ladysmith High School
Real-time stats that will keep the team focused on winning. I had iStatVball 2 for years and years, now this is even better. Best support in the business, quick feedback and advice. They know their stuff. 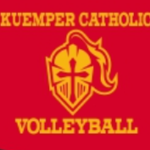 Coach Keith S.
Varsity Head Coach- Kuemper Catholic
Club Director- Carroll Thunder
I've been an iStatVball user for years. There are so many more benefits available in version 3! The shot charts and heat maps are an awesome addition. I highly recommend this app for anyone serious about gaining better insight into their team’s strengths and weaknesses. 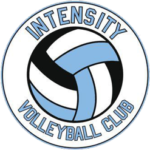 You can upgrade, downgrade, or cancel your subscription at any time.